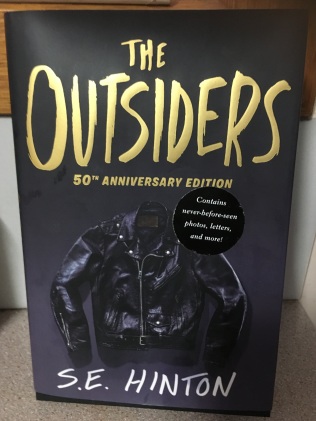 Ponyboy Curtis is fourteen years old. He’s also a Greaser, and that makes all the difference in the world. It’s 1960s Oklahoma, and the rich and poor are divided into two social categories: you’ve got the rich, well-dressed, Corvette-driving West Side Socs, and you’ve got the poor, leather jacket-wearing, oily haired, “hoodlum” East Side Greasers. The Curtis’s are doing it tough: Ponyboy’s brothers Darry and Sodapop dropped out of school to make ends meet, his rag-tag gang of friends are all doing it varying levels of tough, especially his closest buddy, sixteen year old Johnny. But over the course of a couple of days, Ponyboy’s life changes irrevocably. He’s beaten up (“jumped”) by a group of Socs, and Johnny Cade saves the day by killing one of the Socs, Bob Sheldon, to protect him. Before long, things have spiralled out of control, and soon both suburban Oklahoma and society in general will learn just how blurred the lines are between Greaser and Soc, rich and poor, civilised and uncivilised.

I first read S.E. Hinton’s The Outsiders for high school English, when I was the same age as Ponyboy, and it was one of the few stories that had a lasting impact on me (the other being Elie Wiesel’s Night). I wanted to be an author and S.E. Hinton being a teenage success story was an inspiration. I ended up losing that edition of the book, much like my original copy of Night, handing it down to a younger sibling, forgetting about it until very recently when I bought it on a whim off Book Depository with a nice, fancy hardback cover, and decided to reread it for the first time in over a decade. Has it held up since the mid ’00s?

Even though I’m not a teenager anymore, I can see why The Outsiders had a lasting impact. It makes all the difference that Hinton wrote this when she was young, because Ponyboy reads like a teenager, and that’s something that was (and still is to an extent) difficult to find in children’s and YA fiction. Most adults give away little signs in their YA that they’re, in fact, adults, whether that’s dated references, awkward use of the present technology, even just small things. In The Outsiders, all the emotion is there, the awkward understanding of the adult world, Ponyboy feeling the desire to act tough for his siblings and gang and the world, but still sleeping with his brother and refusing to drink because he doesn’t like the taste of alcohol. It’s real and raw and overemotional and a whirlwind, just like being a teenager, even though adults seem to pretend to forget we were never like that (Note to all the Back in my days folks). But it also makes sense because Ponyboy is thrown through so much shit over the course of a couple of days, and is expected to just accept it. His doctor says he will forget and move on in time, and that’s what a lot of medical professional were like up until very recently, but only in the past decade have we learned that holding it in and pretending nothing’s changed causes lasting harm to adults traumatised when they were young. Ponyboy is a fourteen year old, ahead a year in school, with both book- and street-smarts, but even he goes through so much watching multiple people, two of whom he cares about, die, and, still, the only reason he’s seen as a person instead of a struggling, greasy hoodlum is because he helped save some children from a church fire.

The most devastating part of The Outsiders is the intertwining life and death of Johnny Cade, especially when shown alongside Dally Winston and Bob Sheldon. Johnny is the character apart from our protagonist who I felt I was most attached to. He is sixteen and his mother and father are abusive, neglectful trash who see him as a burden even when he is a dying hero. I feel kinda like I’m still in high school, writing a two page essay about these characters, but with Johnny, both his life and death are just tragic. Just before his death (spoilers aren’t really necessary, this book is over half a century old), Ponyboy shows Johnny just how much light there really is in life, with sunsets and Gone with the Wind and poetry by Robert Frost, and most of all, that even though his family was no real family, his friends were an even better replacement. There are plenty of people on the internet who see Johnny and Dally or Johnny and Ponyboy as gay, and there’s nothing wrong with that (it’s just a headcanon, and we just have to look at J.K Rowling as an example of terrible canon), but The Outsiders shows good relationships between males, friendships between two males, relationships so close and bonded and full of love and not at all toxic, even if Dally was the opposite side of Johnny’s caring, heroic coin. Dally and Johnny were both greasers, wronged by a society that didn’t (and likely still doesn’t) care about them, and they put on a brave, strong face for the public because they were expected to, and barely anyone saw their suffering until too late. Johnny and Dally were both good people, and Ponyboy’s correct that society will only mourn one of them and that is the most tragic thing of all here.

I feel like my most scathing critique of this book would be some of the things that tell you The Outsiders was written by that weird horse girl everyone remembers from school. From Ponyboy’s name, the stories told about Sodapop’s “horse”, and the horsey way Ponyboy describes various people, I can understand Hinton was just writing what she knew, and hey, any adult equestriennes: you do you, but it just threw me a little out of this story of a fourteen year old boy and reminded me it was written by a teenage girl. But then I’m reminded that apparently Hinton was inspired by a male greaser friend who was jumped and wanted to tell his story and those like it—you can especially see this in the last few pages of the novel, and it’s not really a critique enough to bring a story down. You could say it nagged on me.

S.E. Hinton’s The Outsiders is a short classic with a lot to tell, and I still enjoyed reading it as much I did when I was forced to read it back in high school. It was nice to just enjoy it and not have to look for hidden meanings, and I read it in a couple of sittings, and would recommend it as a book for teenagers, because if one thing doesn’t change over the eons, it’s that teenagers are always sneered upon by adults who claim to know better despite their parents telling them they were the problem, repeated ad nauseum throughout history, so teenagers would enjoy this as proof that teenagers have been criticised since the word was invented. It’s good to have proof you’re not alone. I especially like how Hinton tackles class divide, between the rich and the poor, I loved the relationship between the siblings and the greasers, even though Cherry Valance felt a little tacked on as a character to show how Socs and Greasers can get along, I still liked her relationship with Ponyboy and Bob, and as Pony would say, boy golly, this gave me a lot of emotions. I’ll probably read this again in a couple of years. Recommended for teenagers and adults alike.