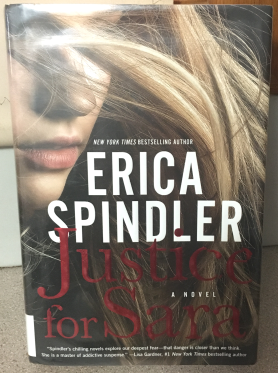 Ten years ago, Sara McCall was brutally murdered with her sister’s baseball bat in small town Louisiana. Her younger sister, teen rebel Katherine McCall, was the logical and only suspect; she loathed her sister and they constantly fought. However, she was found not guilty after a lengthy trial, and disappeared to the Pacific Northwest to escape from the scrutinous glare of her neighbours and townsfolk.

A decade after the murder, Kat McCall returns to Liberty, Louisiana, to find justice for Sara. She’s been receiving letters from an anonymous stalker who still thinks she got away with murder, and Kat’s decided the only way to move on is to return home and find out who killed her sister once and for all. But the townspeople aren’t happy to see her, and someone, or some people, are willing to do anything to keep her quiet. She’s got an ally in local cop Luke Tanner, son of the Sergeant who so adamantly believed she was the killer, but is he the only one? Who killed Sara? Who killed Wally, the cop on the beat who also died that night, but no-one could find any connection? Will the letter writer finally destroy Kat and receive justice for Sara? Will Kat finally discover who killed her sister? Is she willing to bend the law—and find herself in harm’s way—to dole out justice?

Justice for Sara by Erica Spindler is a suspense thriller with a romance subplot released in 2013. Why am I reading it now, you may ask? It’s for research. Writing research. I’ve been following the words of the mighty Stephen King—good writers read—and I’ve been reading about a specific location, in this case Louisiana, as research for a current WIP. If you have lived or currently live there, I’d love to hear from you in the comments. But…back to the review!  Justice for Sara is a decent thriller that keeps you interested throughout the whole 300-odd pages. I became invested in the lives of Kat McCall, Luke Tanner, and the townspeople of Liberty. While I was there with Kat the whole time trying to figure out who killed her sister, I also had that niggling question in the back of my mind the whole time—What if she’s actually the killer? You really do want to see justice for Sara; a kindly, struggling teacher who was only doing the best she could as main guardian to her generic-rebellious sister. Their parents died a few years prior to Sara’s murder, and despite having money, Sara McCall wasn’t a character you loathed for having a lot of money; she was kindly and affectionate and you find yourself reading and reading to see what really happened.

With a whole town against Kat, as well as the McCall’s having a lot of money, there’s a lot of people to suspect: from Sara’s boyfriend Danny Sullivan, Kat’s boyfriend Ryan (both of whom were with the girls for their money), Ryan’s now-wife and Kat’s old friend Bitsy, cousin Jeremy, Jeremy’s wife Lilith, Sergeant Tanner, maybe Luke, and even the elderly neighbour across the street. Perhaps one of Spindler’s biggest mistakes is giving one specific character the name that she does. Maybe that was her aim; make it so obvious, a la Scream, you think, “It can’t possibly be them!” That was my thinking process, and boy has it been overdone. I still thought, “It can’t possibly be them,” and when the killer is revealed, I was both surprised and disappointed.

When the aforementioned killer is revealed, I was expecting more—there was still another fifty or so pages to go—so I was expecting another big plot reveal. That’s what happens. This first killer surprised me; I hadn’t thought of them, thinking it was too obvious. But I was right that there was another big plot twist right at the end, and I completely guessed that person’s involvement. When Kat deduces the red herring couple are murderers, I knew it was a red herring, and I could see the clues and hints Spindler had laced into her writing to prepare for the Final Killer’s reveal. What I didn’t expect were their motivations (especially regarding with the Letter Writer/arsonist), even thought you could definitely see it. Maybe I just thought the secret relationship was a bit cliche, but you know, seeing the killers together, especially when Kat overhears them out-of-context, you can understand why the Final Killer does what they do. Instead of being a disappointment, I was glad my intuition was correct, and it made for more of an enjoyable ending. It hurts more that the second reveal killer is who they are, especially their connection with Kat…That would definitely effect her well after the book’s final pages.

Despite coming into Justice for Sara expecting a straight thriller, I did enjoy the romance subplot between Kat and Luke, and it was nice to see their romance develop alongside the revelations of the plot. It did feel a little convenient, and raised a lot of issues about ethics in the LPD, but hey, I’m a sucker for a nice, sweet romance in a thriller. I felt like Luke and Sergeant Tanner’s tragic backstory felt tacked on, so we could feel like Kat and Luke could have a connection and feel unique in their suffering of having experienced loss together. It also felt like it was a plot convenience and only existed so Sergeant Tanner could have a reason for withholding important information right until the very last second. We know Luke doesn’t really believe his father is all he’s made up to be by the people of Liberty, but a huge scene is made of Luke realising his father is not perfect. You know, Luke! Maybe that was Spindler’s intention: to foreshadow the ethical issues of Kat and Luke’s relationship and how it would affect Luke reopening the Sara McCall murder, and then showing his father is just like him and is unethical himself, despite the grandstanding about Sergeant Tanner being the great, tough small-town cop.

Justice for Sara was a nice, simple read that made me interested in the lives of a small group of characters in small-town USA. While I predicted the second reveal killer, which didn’t take from the story, and it was interesting to learn his motivations. If you’re in it for a nice little romance with a cop that’s clearly wish-fulfillment for Spindler’s intended audience, then you’ll have a good time with this. It wasn’t groundbreaking, but it was perfectly fine as it was.