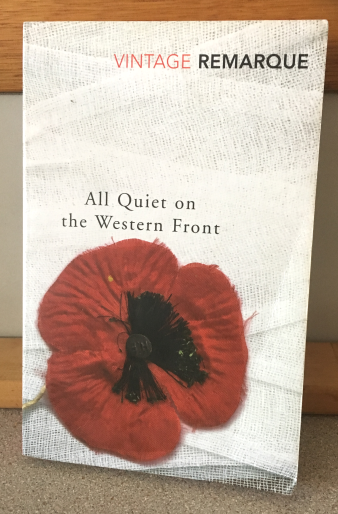 Paul Bäumer and his group of friends are young, wide-eyed and full of life when they are encouraged to enlist in the Great War by their schoolmaster Kantorek. Over the course of 1914-1918, Bäumer and his classmates, as well as a host of others he meets after enlisting—including the wise Katczinsky—are irrevocably changed. Bäumer and his fellow soldiers quickly discover that war isn’t the glorious, amazing thing their family and elders told them it would be, and throughout the course of 200 pages, we discover the true horrors of war, through poetic, emotive language. Over a century has passed since WWI, but the horrors of PTSD, camaraderie and mateship, war, and suffering by both Bäumer and his fellow Germans, as well as the “enemy” French and English…that never changes. As is oft-quoted by Fallout:War. War Never Changes.

This is the story of All Quiet on the Western Front, originally published in German under the title, Im Westen nichts Neues (In The West, Nothing New), in 1929 by Erich Maria Remarque, and generally considered the original war memoir of the 20th century.

I was drawn to read All Quiet on the Western Front, after watching the 1979 TV movie for a history class back in high school. Not long after, I used a book voucher to buy the book, and then nine years passed, and I didn’t read it. Why? Perhaps I was daunted by the idea of classics in my teens and early 20’s. The movie had left a huge impact on me, especially the ending. You expect it, but it’s still heart-wrenching. I finally picked up the book again in late 2018, after realising I own far too many unread books. I read half of it, then put it down. Earlier this year, I discovered I had a problem finishing books. So, so many unread books. Unread bookshelf books. Unread library books. Earlier this month, I started my way through the library books stack. Mostly it’s been nonfiction—mainly on mental health and minimalism, two topics that interest me—but in that stack I found All Quiet on the Western Front, over halfway finished. So I finished it. And…I don’t know why I procrastinated finishing it for so long. Because Remarque’s classic is truly deserving as a classic.

First of all, some history context, as if you need another reason to read All Quiet on the Western Front. While Remarque’s work was a bestseller when it was published in 1929, it was immediately banned when Adolf Hitler became Germany’s Chancellor, for anti-war sentiment. It pissed Hitler off so much that Remarque, whose birth name was Erich Remark, had changed his surname from the German “k” to the French “que”, that Remarque emigrated to the United States pretty early on in Hitler’s reign of terror. Because he couldn’t reach Remarque, Hitler actually went to the effort of beheading Remarque’s sister, Elfriede Scholz, in 1943. Anti-war novels were seen as anti-German, and Hitler, who was also a veteran of WWI, couldn’t understand why Remarque was so critical of World War I. This only made me more interested in finishing All Quiet on the Western Front, because if there’s something that makes me wanna read a novel, it’s because someone somewhere has attempted to have it banned/refused sale. I’m looking at you, Stephen King with Rage, which I read back in 2014.

Now, back to the story. All Quiet on the Western Front is a beautiful, memorable literary read. If you’re expecting lots of plot with action and gunfights, this isn’t the book for you, because Remarque makes it obvious pretty early on he is anti-war. And it makes sense. Bäumer is a stand-in for Remarque, and the character shares many parallels with Remarque’s own WWI journey (apart from the end, of course).

We start with Paul, alongside his friends Albert Kropp, Haie Westhus, and Friedrich Muller, who are all convinced by their teacher Professor Kantorek, to enlist in the War, as he proclaims it will make them heroes, and war is all about glory, and only good things can come from helping the Fatherland. We are there with Paul and his classmates, ready and eager for War, but the foreshadowing of the horrors that lie beyond is already prevalent, especially when a classmate, Leer, is hesitant about signing up, but guilted by Kantorek in the end. It’s Bäumer’s casual mentioning, that Leer was one of the first of his classmates dead on the Western Front, that we learn we are not going to have a happy ending. Soon we meet up with the asshole lieutenant in charge of training the boys, Himmelstoss, as well as men who we/Paul will become close with through the course of the novel, like Detering the farmer and, most importantly, Stanislaus “Kat” Katczinsky, Bäumer’s mentor. We are still hopeful, as Germany still stands a chance in the War, and the boys are being fed well.

But time passes. Classmates die. Bäumer returns to his family—his ailing mother and two sisters—and grows increasingly distant. He’s young, hasn’t had a chance to live his life, unlike Detering the farmer and Kat, who has a family. This is what is so horrifying about All Quiet on the Western Front. The Lost Generation—of which Bäumer and, by extension, Remarque’s—generation are from, are called the Lost Generation. Bäumer was barely an adult when he and his friends were forced into a war that had nothing to do with them, and when he returned briefly for leave, the people left in his hometown expected him to behave exactly the same. When all you know is murder and bloodshed and shells and Verey lights, how can you be expected to just move on and live as usual? Especially when those you are fighting for—for Bäumer/Remarque, it was Kaiser Wilhelm—are living in relative luxury. This is perfectly displayed when Kaiser Wilhelm visits the troops. The soldiers are given new boots and outfits, Kaiser Wilhelm greets them and calls them good little soldiers. When he leaves, they are forced to give back the clean outfits and resume with their meagre rations and holey boots and stained uniforms. As Germany slowly but surely starts the descent that leads to them losing WWI, so too do the spirits of Bäumer and his cohorts.

Here are some lines that stuck with me from the latter half of the novel:

The factory owners in Germany have grown rich, while dysentery racks our guts (p.191)

Here we show a clear display between rich and poor, regular person and the upperclassmen who start these wars, even to this day. While people in the twenty-first century are busy complaining about petty issues like the Left/Right divide, the rich still hold the same levels of power, controlling the poor. Do the factory owners truly care if dysentery is racking your guts?

Those are the dangerous moments, the ones that show us that the way we have adapted is really artificial after all, that it isn’t a simple calmness, but rather a desperate struggle to attain calmness (p. 187)

Here Bäumer/Remarque is telling us about the artificial camaraderie between soldiers during wartime. He tells us that mateship is all that binds these soldiers during times of desperate struggle; that, without it, what point is there to keep going? “Mateship” itself is a term used in Australian history to refer to ANZACs (Australian and New Zealand soldiers) who embody equality, loyalty and friendship, and originally referred to these ANZACs utilising mateship in order to stay alive during World War I. When there is so much horror and bloodshed around you, the soldiers found that having a strong camaraderie with their fellow soldiers kept them fighting, kept them going strong, even through the most horrific, indescribable of moments. Remarque tells us the brutal truth: this isn’t a true friendship. In the moment, of course it is. When it is only you and the other soldiers fighting to stop death’s door knock, then mateship is the only thing keeping you alive. But, after the War, this mateship mostly vanished as if it almost didn’t exist. Older soldiers went on to their families, to their jobs. Younger soldiers like Remarque had nothing. Nobody else could comprehend their situation. Back in the “good old days”, as Baby Boomers like to think it, veterans like Erich Maria Remarque had no one to turn to. If you had problems, you kept it to yourself. War-induced Post-Traumatic Stress Disorder—or shellshock, as it was known—just made you odd. It had you locked up. Passersby gave you strange looks. A century onward, hearing essayists and bored political pundits rant about the “toxicity” of male camaraderie during wartime, is infuriating, and seems like they don’t understand the history of the term, unless they are criticising the nostalgic rose tinted lens view of mateship that Baby Boomers have idealised in the war their parents and grandparents fought.

This is what Erich Maria Remarque does so well with All Quiet on the Western Front: he perfectly encapsulates the horrors of war in a not-so-neat 200 page novel. War is not heroic and neat and beautiful and amazing. In Remarque’s case, it is barely-adult boys fighting wars on behalf of richer man who do not give a fuck whether they live or die. By the end of the novel, the deaths of young men—regardless of which side they are on—is a travesty. Remarque never blames the French or the English or the Americans. He sees the other side exactly as his own: wide-eyed boys with their eyes torn wide open by the horrors of reality.

At the end, Bäumer is a shell of his former self, as if he even had a chance to develop a self. He becomes another soldier. Since the War has become his everything, when he even loses that, what is left?

While the end of the novel is not as heartbreaking as the 1979 film, perhaps that is what makes it stronger. The film tries to be artistic, and while it is still haunting, the novel portrays the bleak reality.