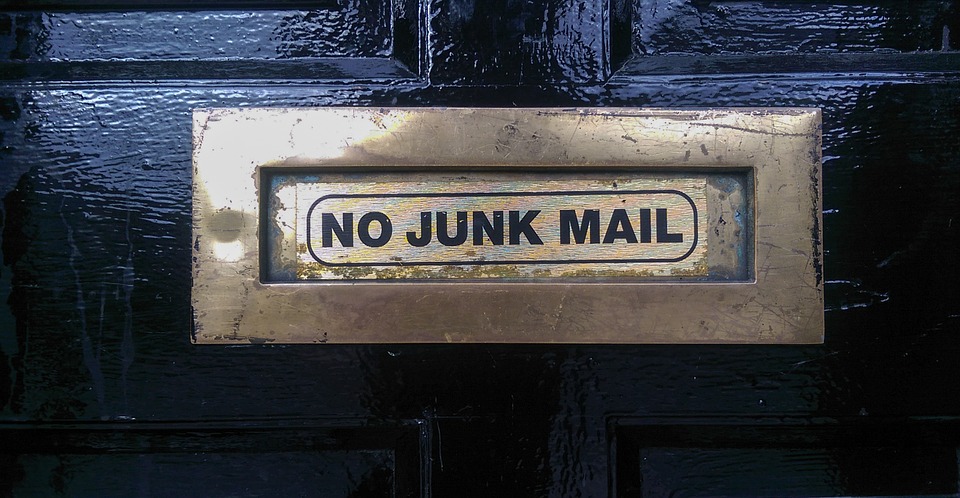 If you’ve ever ventured beyond the main inbox of your personal or work email address, you will definitely have clicked on that fated Junk Email folder at least once in your life. Sometimes you don’t even need to escape to the dreaded subfolders to even witness scam emails: Some of them pop right up into your main inbox, undetected by the spam filters, likely even undetected by you amidst your 4,305 strong unread emails. If so, lucky you.

Millions of people around the world are fooled by scammers and spammers every single day. You’ve probably seen some sad story of a newly-single grandmother looking for love online and falling for a Nigerian Prince scam instead. What about John Podesta–he fell for the Russian scam emails that were going around back in 2015 and were clearly based off your Facebook statuses and Google searches? Likely even someone you personally know–or even more unfortunately, you, have fallen for one of these scams. Fortunately for you, I’ve decided to soften the blow of these awful, awful people, by joking about said junk emails, and critiquing them. If you’d like to see my previous critiques of scammers, you can start with You have pending blog posts scammer: An Introductory Guide to Spam Emails and its follow-up Responding to Spam Posts on a Post about Spam: A Hate Story. If you’re done with those, however, how about you come along with me as we mock spam emails together in Current Year 2018?! 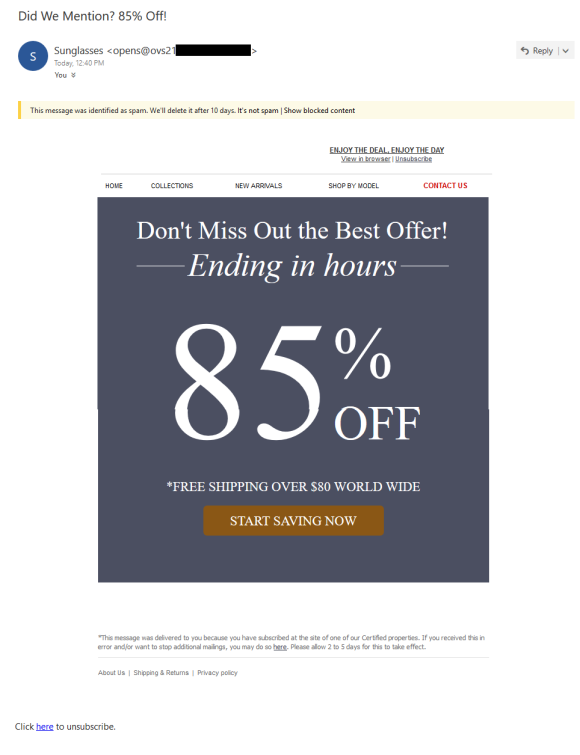 Oh no, yet another one of those “Ray Bans for special, only 93 per cent off, look I’ve tagged all my Facebook friends to buy these Ray Bans, this account is totally not hacked!” advertisements for sunglasses. Definitely never seen that before /sarcasm. C+ for at least putting in the effort to look like a real email. 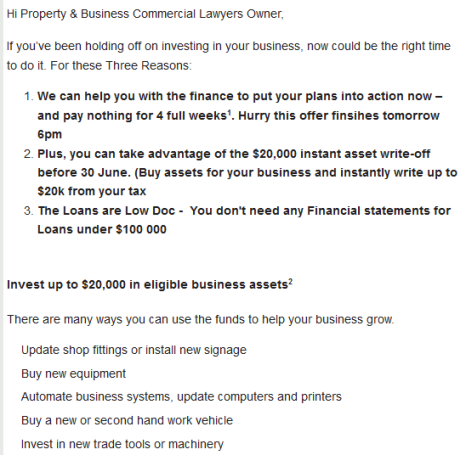 Ahh, how did you know that my name is Property & Business Commercial Lawyers Owner? All my friends just call me Pbclo. It’s pronounced Pib-clow. This email is designed to cater to the tech-savvy yuppies who invested in Bitcoin just after it became cool. However, as someone who studied writing and editing at university, I just want to edit this with a bright red pen and shout at it. “Finsihes tomorrow 6pm”. Argh! 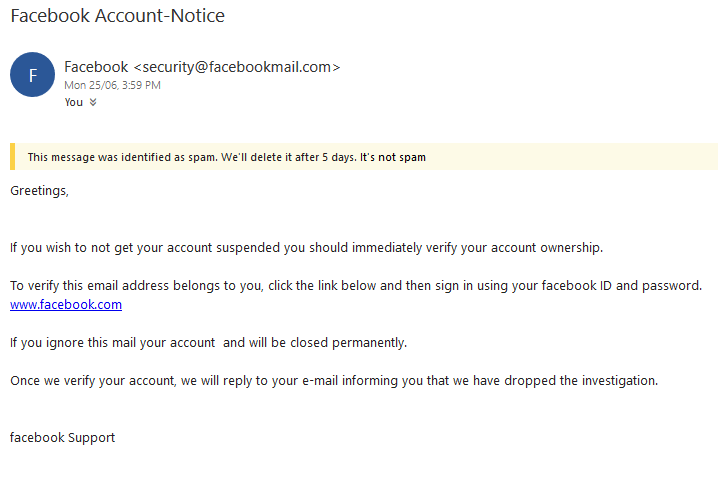 Now, this is the sort of spam email I live for. It reads similarly to the Terhune emails of yore (i.e. 2015), and is so obviously fake, it weeds out the gullible from everyone else. For one, there’s no Facebook logo. It’s just text, and any old schmuck on the internet could send this out. Secondly, a good tip to check if your email is legitimate is READ THE SENDER’S EMAIL ADDRESS. security@facebookmail… facebookmail? If you see all of the social medias as FaceSpace and MyBook, this could be an easy error to overlook.

Another red flag is not referring to you by name. Instead of simply Greetings, a real email (not e-mail like this scamfest says), it would say “Dear Jack Septiceye” or “Dear Jack”. Last of all, most sites won’t tell you to click on a link unless you’ve just signed up. Also… if your account has been suspended, Facebook will tell you on their website. 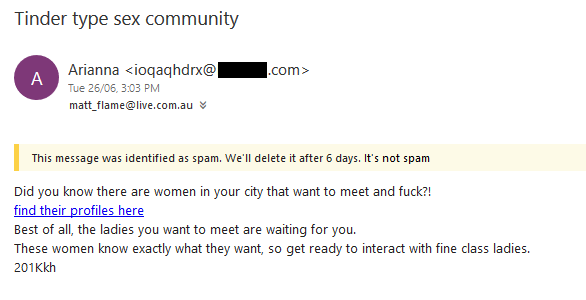 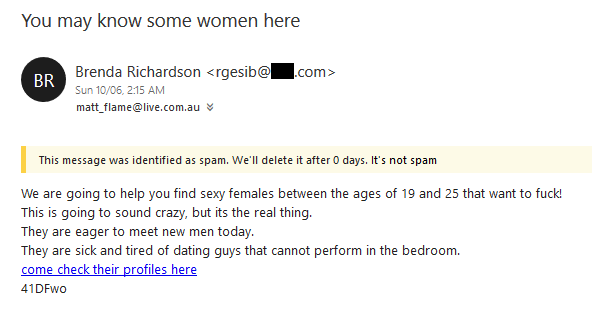 Two different emails, clearly the same person. “Brenda” and “Arianna” really want you to meet sexy females/women that want to fuck you. Plus, they’ve also been nice enough to give us a randomly generated series of numbers down the bottom. The biggest joke here: That they’re clearly sending emails to thousands of people via a mailing list that they’ve kindly shared with us. Poor Matt Flame. 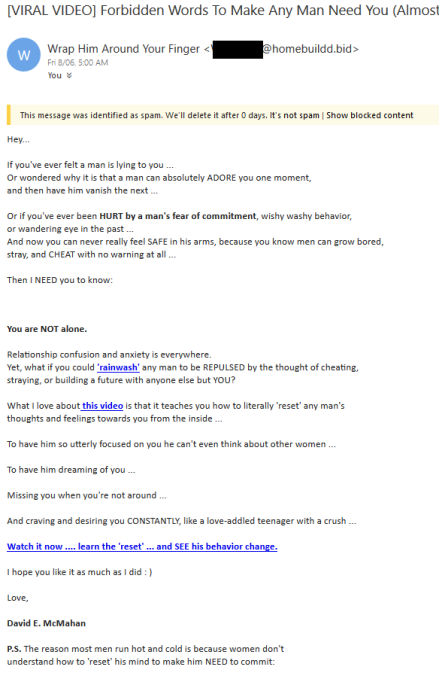 In the same Junk Mail folder with two emails claiming to get a young man women who want to fuck him, scammers also seem to think you’re a woman who wants a man to stay with you forever. “David E. McMahan” claims to have the answer: You can watch his video and learn how to reset a man’s mind. This scam email will only ever work for two types of people: desperate singles and radical feminists . Otherwise, it’s pretty… wishy washy… 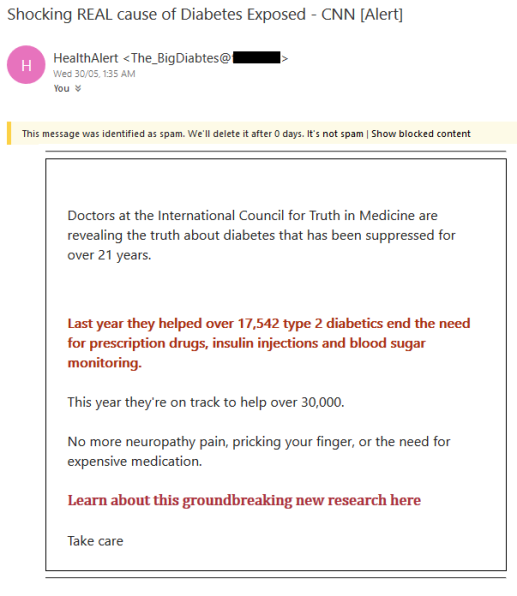 Hahahahahahaha. The_BigDiabtes. The best way to get people to believe that diabetes is made-up is to email random people and sound exactly like a spam email. Scammy is as scammy does. This reads like those ridiculous “Vaccines cause autism” loonies. Wanna guess the “research” likely involves cannabis oil, veganism, or paying $399 for their Amazon book? More likely it just involves a virus that takes down your computer. 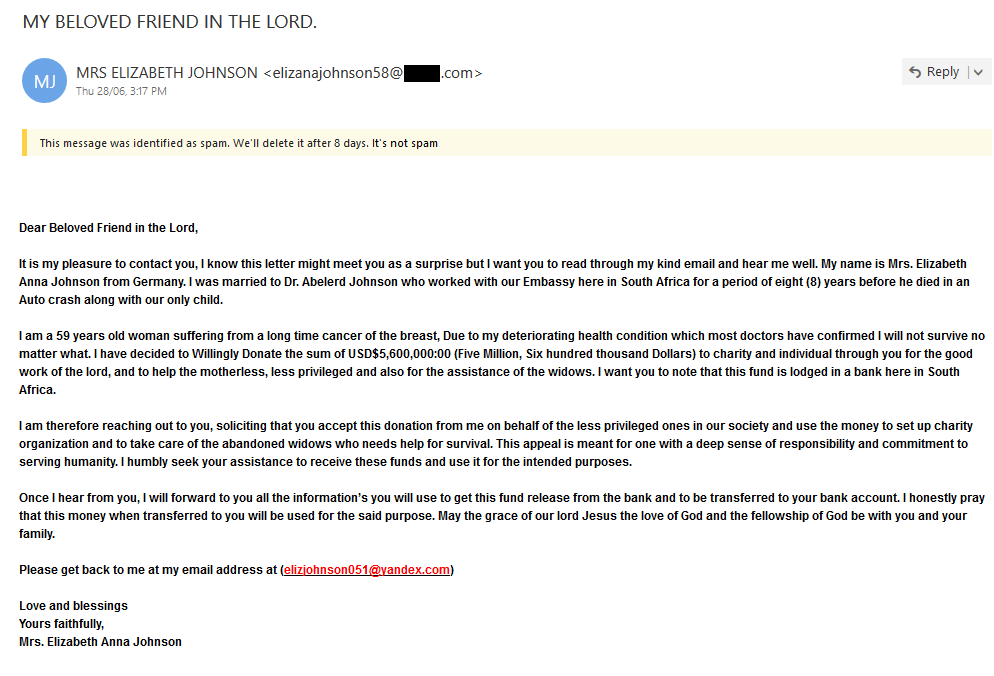 With the final Junk Mail scam, I thought I’d finish up with something you’re used to: a Nigerian (or other West African nation) scammer sending you a sob story and asking for your hard-earned cash. Elizabeth Anna Johnson, a “German” woman, has “long time cancer of the breast” and needs your help. She probably wants you to wire her the money via Western Union, but if you do, you might as well be throwing your money into the air and lighting it on fire. This sort of email is the most easily believed, and you’ve got to stop believing it now. If you want love, you won’t find it in your Junk Mail folder.

Otherwise, B+ for creativity, F for F***wit Scammer.