In December, when I was reviewing The One Who Got Away by Caroline Overington, I told myself “No more! No more reading Gone Girl knock-offs!” But, you know what, I was lying to myself. Because I’m going to read The Child by Fiona Barton and Paula Hawkins’s second book later this year. However, for The Girl Before, this month’s book, I wasn’t interested in it for a long while. You can blame my mother. My mum likes tagging me in stuff on Facebook, and she kept tagging me in stuff about this book, and telling me about it whenever she could. In the end, I caved in and requested it from the library. Last week, I discovered I only had two weeks to read it because of the monstrous queue at the library waiting to get their hands on this Girl on the Train-meets-Fifty Shades of Grey mix-up by the pseudonymous JP Delaney. Much like the other Gone Girl knock-offs, this book was a breeze to read, and I finished it in roughly a week, so lo and behold my review:

The Girl Before by JP Delaney was released in January of this year, and according to the book’s About the Author, there’s already a movie directed by Ron Howard in the works. The quick synopsis is this: two women, one in the present (Jane Cavendish) and the girl before (Emma Matthews), tell of their life in One Folgate Street, a cheap rental property with unique rules created by a perfectionist landlord they must abide by. Both women move into the house after dealing with their own traumas (Jane’s still reeling with the loss of Isabel, her stillborn baby, and Emma had a traumatic break-in in her last home) when they both embark on a relationship with the standoffish, perfectionist minimalist that is their landlord Edward Monkford. When Jane discovers that Emma, The Girl Before, died in One Folgate Street, she sets out to find out who killed Emma, which leads to her wondering if she can even trust the ultra-minimalist house at all? 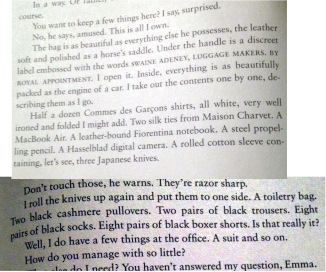 Mr. Under 100 Belongings warns Emma not to touch his sharp knives. By the way, he ain’t the killer.

Much like the other Gone Girl knock-offs, The Girl Before is an easy, quick read. I read about 70% of the book in two consecutive nights, and the chapters are short and quick (usually about one to four pages), so it’s easy to keep reading. And the story is truly intriguing. Many of the characters are complex and unlikeable, which is par for the course for this sub-genre. Jane Cavendish, the current tenant, is innocent and friendly and you feel sorry for her loss, but at the same time, she is unbelievably naive, especially when her friends and Carol Younson (Emma’s old psychologist) are telling her about how creepy Edward Monkford is, and she dismisses it. Emma swaps between a character you’d root for, and someone you want to slap for being so damn manipulative. Edward Monkford is basically Christian Grey as a landlord and even has the same first name as the original Grey, Edward Cullen. Monkford is described as basically the most attractive man alive, but because of his extreme minimalism and snootiness, I couldn’t help but picture him as The Minimalists’s Joshua Fields Millburn. It made the novel less serious picturing Monkford as a younger Christopher Walken, but the way Monkford talks about possessions is so much like Millburn’s it’s uncanny. You have a slew of other characters that are only in the book so Jane can question if they could have killed Emma. There’s Simon, her emotional magazine reporter ex-boyfriend. There’s Deon Nelson, the chav who’s Emma’s alleged rapist and his rag-tag crew of feral friends. There’s the bitter cop who believed her manipulations. There’s Saul Aksoy, Simon’s old friend and resident sexist in the workplace.

The first three-quarters of the book were interesting, and kept me hooked in. Emma and Jane’s stories intertwined were fascinating, especially when their scenes in the past and present mimicked each other. Edward Monkford and One Folgate Street are built up to be incredibly untrustworthy. I still didn’t understand what made both women want to move into One Folgate Street. I mean, the house is controlled by technology, and the landlord’s rules are definitely not the norm. No knick-knacks, nothing of your own to display, no books, clean everything after you use it, forced installation of the Cortana-like Housekeeper app onto your phone and laptop? Jeez, weren’t any of these warning signs to these women? I mean, cheap properties are hard to come across, and I’ve heard the London rental market can be hard, much like any city. But there are enough red flags in the rental clauses—which much like Anesthesia Steele, Jane ignores and signs at the dotted line—to make both women question Monkford’s motives? I know, I know, Monkford is spoiler not the bad guy and just a poor guy who lost his wife and son to a tragic accident and that turned into a rough-sex lovin’ control freak. But his behaviour throughout the whole novel is not justified by a woe is me I lost my family. Just like Emma, who’s forgiven by most despite her manipulative actions and lies. I suppose that it’s just something I should just get used to with these knock-offs. The book likes to manipulate you about characters and then bam, they’re actually revealed to be completely different.

My main problem was with the ending. Of course I would run a mile if a guy said he was a Nice Guy, because most Los Angeles-residing male allies or  basement dwelling 4channers who call themselves Nice Guys are usually incredibly shady. Delaney, however, seemed to think the villain’s hacking and awful behaviour made up for Monkford being a generally horrible person. A man (like Monkford) who makes Jane decide between their child or him and his perfect house is not a good man. However, to me, making the final villain the villain was an incredible cop-out. He did horrible things but it didn’t make sense for him to be the antagonist. He wouldn’t have been able to hack the One Folgate Street interface if the Monkford Partnership hadn’t put cameras and this Cortana-esque stuff in the house in the first place. Sure, Housekeeper is there to make the house a better place for the occupant (sarcasm)! This opens up a lot of debate about technology and its role in our houses and lives, especially in the wake of the Wikileaks release of data about the CIA spying on citizens. When functioning properly, One Folgate Street functions perfectly in sync with the occupant, but when hacked, can destroy the life of said person. Other than that, the minimalist house is something many have wished for at some point in their lives, and without the creepy Housekeeper/camera-spying part, One Folgate Street seems like a beautiful dream of a house.

For the most part, I’m sick and tired of all these books with Girl in their title or an incredibly similar premise to the originals. While this one was enjoyable up until the big reveal, it was still just more of the same, albeit this one was crossed with Fifty Shades of Grey and its premise of the controlling, emotionally/sexually abusive man who, because of the right woman, learns of his bad ways. It ends with a note from Emma saying that controlling men like Monkford are good because they’re a cross between boring men like Simon and basically-rapists like Saul. This just enforces that many women like rape fantasies, but since books like these sell so well, I just have to sigh. I have no idea who JP Delaney really is, and Google tells me it’s someone called Tony Strong. The author bio says it’s a bestselling author, so if it was someone like J.K Gailbrath Rowling or Stephen Bachman King, I honestly wouldn’t be surprised. There were descriptions that made me think it was someone who either, didn’t understand women or didn’t understand the lower-to-middle class, most likely the latter, especially when a Prada dress is described as “nothing too showy” (page 45). Prada. Forgettable. Hahaha.

The Girl Before is a quick read that makes you want to keep on reading, with a disappointing big reveal. The characters are interesting, fallible and human. However, if you’re sick of Gone Girl and Girl on the Train knock-offs, stay away.