NOTE: This is an opinion piece.

On November 9 2016, Donald Trump won the United States General Election. I’m not usually that big of a political junkie. I live on the other side of the world to the explosion of emotions that was going on in the U.S. My first introduction to politics was a controversial Australian comedy that’s since been watered down to appease to the public—The Chaser’s War on Everything. I was in mid-high school, and it was the first political show palatable to my young, impressionable mind. Combined with the Kevin Rudd, PM segment on Rove Live, I was finally interested in something that previously bored the socks off me. Now, back to the U.S Election. Just two weeks ago, on the ominously dated 9/11/16 (in Australian formatting), Republican Donald Trump, in a massive surprise to the world, the polls and the media, beat out his Democrat rival Hillary Clinton. Trump was the frightening evil underdog, who prior to the election, I only remembered him from The Apprentice and its subsequent board game. Hillary was going to be the first woman President; she was going to change everything. Then came Wikileaks, and the onslaught of right-wing media trying to balance out the crazy extremeness of the left-wing media. Now, I’m not right-wing by any stretch of the imagination—the political compass put me at libertarian/center left—but the over-the-top “Hillary Good–Trump Hitler” narrative of the media left me wondering where the unbiased media of yesterday was. But, there you have it, Trump beat out the odds, and come next year Orange is the New Black (or so the memes say). 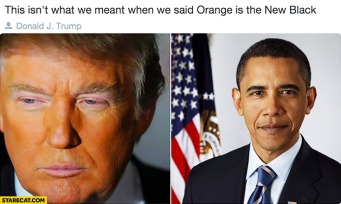 However, that’s not what I’m here to blog about. Of course, you can’t talk about politics without mentioning that slowly burgeoning section of the Democrats/left-wing: social justice. Now, back in the good old days (i.e. twentieth century), social justice was described as:

justice in terms of the distribution of wealth, opportunities, and privileges within a society

While we’re on the topic of definitions, I might as well get another one out the way, and that’s feminism. Over the last thirty years or so, around the time of third-wave feminism, the feminist and social justice movements have morphed together. Here’s the original definition for feminism:

the advocacy of women’s rights on the ground of the equality of the sexes.

Now, those two meanings sound perfectly acceptable, don’t they? Of course we want equality and justice for everyone! Only the fringe elements of the left and right—communists, radical socialists, fascists, Neo-Nazis, etc—wouldn’t want it. But, that’s the main problem. Dictionary definitions aren’t emblematic of a group of people. Follow those and we’d still believe journalism is 100% truth and accuracy, and of course in the modern, social media-driven world, that’s not possible. Other words, generally a little Orwellian in nature, follow the same path. The same happened to feminism and social justice. Somewhere along the way, a bunch of radicals—anarchists who believe people like Emma Goldman are somehow along there with the suffragettes, who she’s widely known to hate—took over the movement and morphed it into something indistinguishable. Back in the past, anarchists only had the power of non-peaceful street protests, leaflets and booklets to hand out in public, and you might have guessed, it didn’t end too well. But in the era of social media, these people have a voice. Everyone has a voice. Previously fringe groups are able to espouse crazy logic on Greys being in control of the Rothschild media, vaccines giving our children autism, poisonous GMOs, and radical anarcho-feminists claiming to be like the regular feminists of old shouting #KillAllMen and claiming everyone with XY chromosome is a walking rape machine. Rational people would think: “Now, these people are all crazy! We wouldn’t allow them to have a voice!” But dress the radical up in the normal and everything becomes okay.You’re probably wondering why this matters in terms of the election. It matters a lot because these same radicals overtook the Hillary Clinton side of the election. They called everyone who disagreed with the apparent deceptive policies coming from the Clinton administration alarming words like “bigoted” and “misogynistic” and “Neo-Nazis”, and feminists like Jessica Valenti even coined terms for fellow Democrats who disagreed with her policies—Berniebros, being the most common. The problem with these are they diminish the meaning of the word. It’s a bit of a Boy Who Cried Wolf situation. Calling out the other side as Neo-Nazis until your voice because hoarse means people won’t believe you if it turns out Mike Pence actually does start herding off members of the LGBT in death camps. Someone simply disagreeing with you doesn’t make them Literally Hitler. Only Adolf Hitler is Literally Hitler. Unless members of the so-coined Alt-Right start throwing babies into furnaces and there’s a comparative Night of the Long Knives,you don’t have to panic just yet. I don’t even think Trump is the person to Make America Great Again. I can’t even get myself to support the Australian equivalent, the Liberal National Party (LNP). Most likely, since the other Republicans don’t even like Trump, he’ll be averagely ineffective.

It’s not the feminists and social justice figures that concern me most at the moment. Of course I’ll panic if Anita Sarkeesian petitions the U.N to ban all video games except her friends’ games, or if Brianna Wu is actually taken seriously as a Governor, or if Australian radical feminist Clementine Ford is taken seriously for her self-help-book-for-teen-girls-but-with-feminism-needlessly-added-in Fight Like a Girl is taken seriously. My problem is their allies—in particular, Male Allies. According to the feminist Wikipedia, Geek Feminism Wiki, allies are described as:

people who support a group who are commonly the subject of discrimination, prejudice, etc, but who are not members of that group. Specifically, feminist allies are individuals who are not women who support women’s rights and promote feminism.

Much like the aforementioned definitions, this term doesn’t ring true. In theory, male allies are meant to help out feminists, women and transwomen from being treated badly in the real world and online. However, that’s not true. Most male allies I’ve come across appear to be the most hateful, anti-women figures out there. Any woman who is not a feminist (like myself) are treated as if we’re scum of the earth, far below those evil, trolling harrassers and Goobergobbers. It doesn’t matter what side of politics you’re on, you’re going to be spat on and chewed out and treated as if you don’t deserve to live. Feminists usually just claim we don’t exist and that we’re sockpuppets for men, or just don’t understand the dictionary definition of feminism (see above to see where I explain this). Both sides claim that I wouldn’t be able to express opinions like these without feminism. That’s wrong. The 1800s movement with Mary Wollstonecraft and her kind, alongside First- and Second-Wave feminists, are the reasons. First Wave gave me the right to vote (in 1908 for the majority, compared to 1920 in the U.S). Second Wave made it illegal for a husband to rape his wife, and instituted the equal pay laws, making it illegal for women to be paid less than men, making the pay gap completely crap and liable to suing the Government. All the current “intersectional” movement has done is ignore these efforts. But, back to male allies. Patton Oswalt describe these types perfectly: 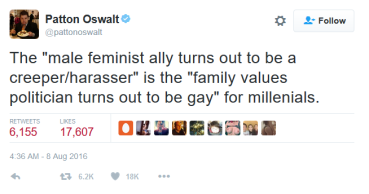 These people are not good people. They claim to be helping feminists and social justice types as an excuse to do what they do best: berate and harass women, and do it with applause and cheers from feminists. And before anyone can tell me “Feminists condone this! We’re against misogyny against women,” I call you out as full of shit. Just take a few examples of male allies being utterly disgusting human beings, with the first one being of so-called feminists supporting their clear harassment. 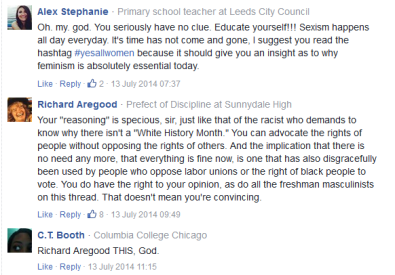 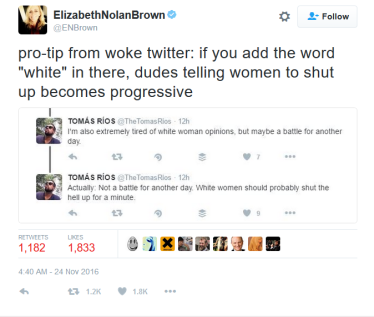 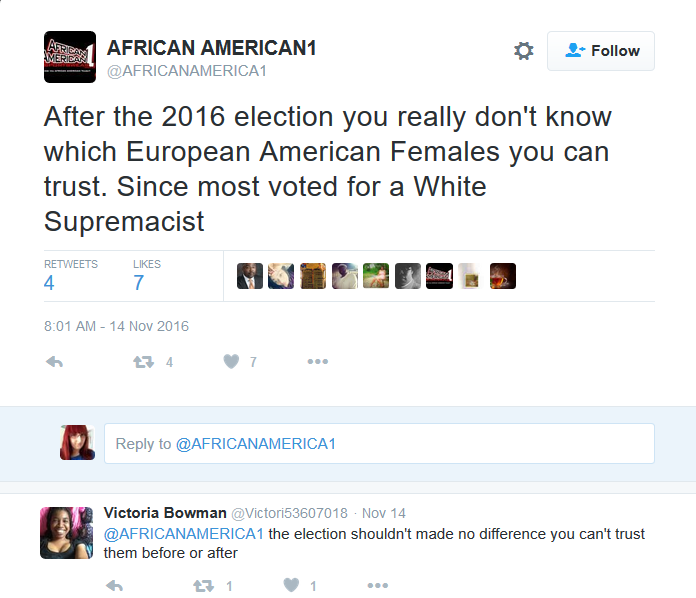 There’s even a man telling anti-feminist women they’ll be raped one day and then they’ll understand: 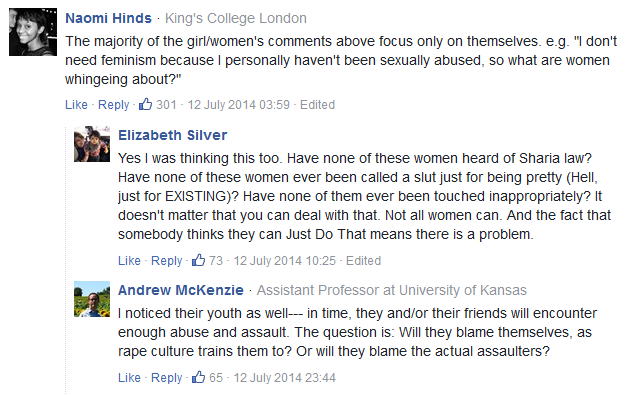 And even suggestions of physical/sexual abuse: 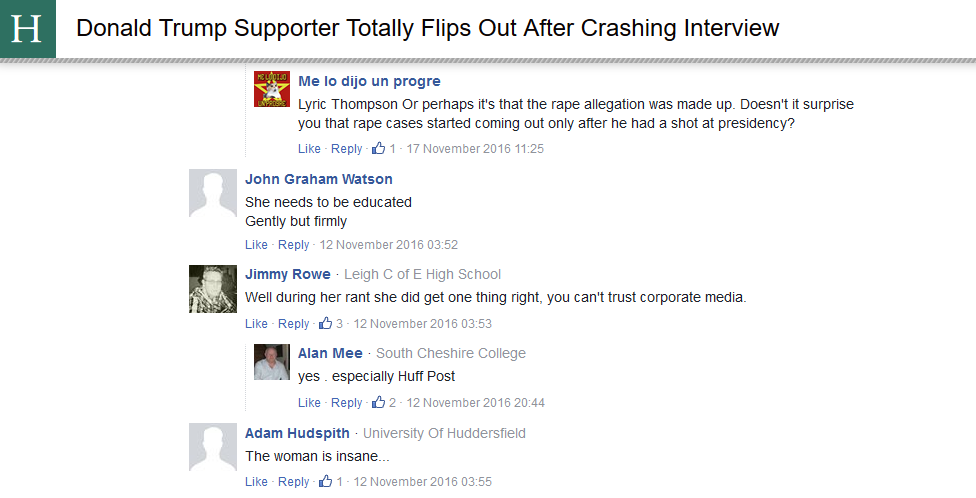 Why should we even be allowed to vote, asks Jack?

After that, is it any shock a lot of people lied about who they voted for in the United States Presidential Election? And if you think these women (or females, as most can’t even see anti-social justice women as human) are still wrong, look at the track records of some of these male allies. The Crash Override Network (CON) Leaks, heavily suppressed by the media because it showed Zoe Quinn in a negative light, also showed alleged crimes by a CON staffer, Robert Marmalejo (@UnseenPerfidy). Marmalejo, in a Skype chat, was seen to be, in his role as a abuse counsellor, abusing the trust of these women and soliciting them for sex. Quinn distanced herself from Marmalejo, but the leaks show it was only an attempt to keep her reputation clean. This led to fellow pro-social justice men coming out of the woodwork, including this off character: 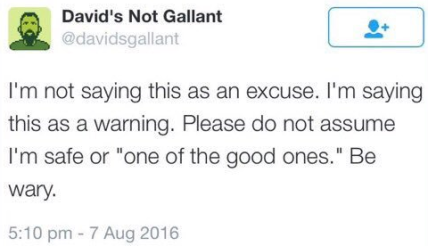 Just check out other accounts of male allies harassing women that don’t fit the mould and you’ll see the utter awfulness of the whole movement. It doesn’t matter how much you claim to be for women, in Chrissy Stockton’s words:

The problem is that if these men really believe in feminism, they shouldn’t be speaking on behalf of women, they should be encouraging women to speak for themselves.

And, despite feminists claiming they don’t speak for them, they do. If Neo-Nazis and the KKK are part of the regular Right, or s0 they claim, and speak for all members of the right, then radical elements of the Left have to be accounted for by the left-wing. People, I want to support you. I am not right-wing in any way, but these sorts of people have distanced me so much from the movement that I’ve essentially become centrist.  It’s awful to tear away the people who you needed most to help your movement, but the salt-mines of lunacy on the Left have left me wondering: Is there  anyone out there who isn’t crazy?

In conclusion, I’m asking for an impossible task: I’m waiting  for the radical left to become self-aware. I’m hoping, instead of asking for ballot recounts and calling everyone who voted for Trump evil monsters (no, 53% of white women aren’t all white women; did you fail Mathematics in high school?) who basically want LGBT and other minorities in death camps, because that’s why you lost the U.S elections. It’s why Brexit happened. It’s why Conservatives are in charge in Australia. But what about the POCs and the minorities!? They matter more than the whiny man-tear whitebabies!  As I said earlier in this article, most decent human beings aren’t against minorities (please stop calling them POCs, its incredibly racist and just “colored people” reversed). You won’t get people to vote for you if you put them into the “EVIL—TOO DIFFICULT TO DEAL WITH” category. You have to get them on your side. That’s how true equality occurred in the past. Suffragettes got white men to agree with them. It’s how the Civil Rights Movement worked, because Martin Luther King Jr. got the whites to agree with him. It’s not a case of “They won’t listen, evil manbabies and white tears, I should just get these rights!” No, you shouldn’t. Life isn’t that easy. So, please, if you’re a male ally or a social justice advocate, heed these words. It’s the only way the “oppressors” will understand you.