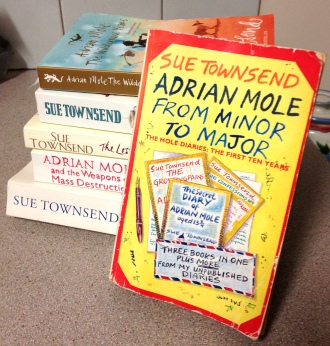 “It is the pinnacle of classic journalling” – Adrian Mole

Today I decided to write a blog post. Before I started the blog post, I thought: Hmm…what should I blog about today? I haven’t made a post since I reviewed Fiona Barton’s excellent thriller The Widow in the middle of last month. However, I have a read a book since last month. Actually, a few books. It was an omnibus of the dead gripping Adrian Mole books; to be specific, the first three Adrian Mole books. I was meaning to start the latest Harry Potter book, Harry Potter and the Cursed Child, but instead, my eyes feasted upon a series I enjoyed reading when I was younger.

As a kid, the second book, The Growing Pains of Adrian Mole (1984), was a book I read to procrastinate from reading other, more important books. It sat in the shelf to be re-read time and time again, alongside Anne of Green Gables, the first two Harry Potters, Shadow Alley (an Australian crime collection), and Naughtiest Girl is a Monitor/Bimbo and Topsy by Enid Blyton. However, I enjoyed reading the second Adrian Mole book simply because it was interesting and gripping, and stupidly, I thought Adrian was a young genius writer and I sympathised with him over others not recognising his talent. Oh, how wrong I was.

Five or so years ago, I discovered a later book in the series, The Cappuccino Years (1999), and wondered, “Why the hell is Adrian so stupid? What happened to his genius?” Recently, I started reading the series in order, starting with the book I’m about to review now: Adrian Mole: From Minor to Major,  (my edition published in 1994) by Sue Townsend, available here, and I discovered the true reason: Adrian Mole is a complete and utter idiot, and a parody at that. It had completely gone over my child self’s head.

Adrian Mole: From Minor to Major is an omnibus that contains the first three Mole books, plus excerpts that appeared in newspapers such as The Guardian that chronicled his early years. Adrian Mole is a pretentious wanker of a teenage boy, trying to make his stake in the world as a successful author, yet unknowingly possessing no literary talent whatsoever. He was created by Sue Townsend, the British author who sadly died a few years ago before publishing the last Mole book. He was originally created as a BBC Radio 4 play in the UK in 1982, but was soon adapted for novel form, and widely celebrated as a humorous treatment of life as a teenager in England in the 1980s, especially throughout the Margaret Thatcher period, ending when John Major replaced her in the 1990s. Of course, I’ve never been to England, and wasn’t alive in the ’80s, so the Adrian Mole books were particularly interesting for me in that regard, and I enjoyed all the references and reactions to historical events, particularly Adrian’s lack of knowledge about them. For example, he thinks the Falklands War will be as important as Vietnam, and believes in the widely-known hoax The Hitler Diaries.

If you want a quick read, these are the books for you. I blitzed through this omnibus in under a month, and now I’m just over halfway through the next book, The Wilderness Years. The writing style is simplistic, and despite Adrian being an unlikeable narrator, he is genuinely interesting. Despite how badly he treats his longtime crush (Dr.) Pandora Braithwaite, you still feel sorry and want them to end up together, while simultaneously cheering when Pandora kicks him out of her apartment at Oxford for writing lewd poetry. His letters with the BBC’s John Tydeman show exactly how not to send a query letter to a literary agent. His change from a young, literary “genius” as a teenager to a pretentious, asshole douche as an adult makes complete sense, considering he has an ego the size of the the entire Milky Way (possibly bigger). 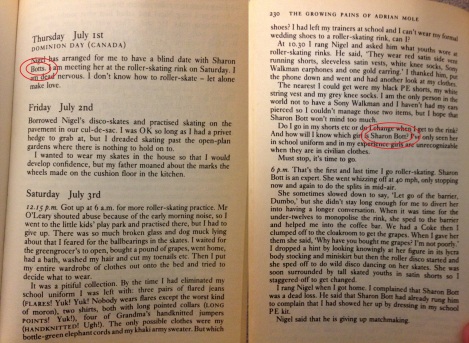 Downsides? Of course there are negatives. There are a lot of inconsistencies on Townsend’s part, especially in regards to names. His grandmother changes from Edna to May. Is it Sharon Bott or Sharon Botts—or sometimes both on the same page? His grandfather, canonically Albert (Adrian’s middle name) changes between a bunch of A-starting names. The most jarring, however, is True Confessions, the third book, which is full of inconsistencies. It is the in-between book, however, filling in between Adrian as a teenager and an adult, and it shows. In the first half, his sister Rosie, born in the second book, seems to have vanished from existence. He’s apparently passed his A and O Levels, despite having failed all except English later on. He’s back with Pandora, despite having broken up. A lot of this can be put down to Adrian being completely incompetent, but most likely, Sue Townsend probably just forgot all these small details.

For the most part, Adrian Mole: From Minor to Major, is an interesting, quick read that’ll take you back in time to the 1980s and early 90s, and feel like you’re living an average life in suburban Leicester with the alarmingly average Adrian Mole and his rag-tag band of family members and assorted friends and acquaintances, including Bert Baxter (his communist elderly associate), Nigel (the gay on-off friend), George and Pauline (his madhouse parents), Barry Kent (bully turned poet) and of course, his true love Pandora. It’s a great commentary of life in that period of time—Thatcher’s England. Adrian is an excellent parody of a teenager, which’ll lead to many teenagers enjoying reading about him, and anyone older having a good laugh about his pure incompetence. Despite its few inconsistencies, the books are definitely not a let down and, especially if you’re a fan of such wonderful topics as the Norwegian Leather Industry and long-winding provincial novels about Gary Stu’s in the classic novel Lo! The Flat Hills of my Homeland, this book is definitely for you.

P.S: This is what mine and Pandora’s review is. It’s dead good!