Usually, before I start writing my monthly blog post, I amble mindlessly around the internet looking for some quick inspiration. 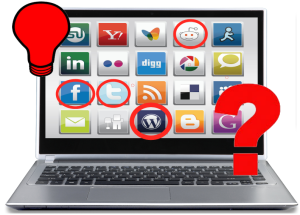 Where shall I find inspiraton for my blog post today? (Image: Various Google images)

I scroll down my Twitterfeed, past all the people advertising their awesome books, and the latest football match, and what insane things the politicians of the world are doing. I look at Facebook, at my WordPress feed, listen to a song or two, peruse my book collection and muse why I own two copies of Black Beauty and three copies of Harry Potter and the Order of the Phoenix, and consider doing a tally of all the inspirational quotes on the interwebs.

Eventually, I find some post that makes me go “Ooh! That’s interesting.” Often, I wonder if it’s too risque to post on the subject, but then I question how many posts I can make on doing what you love (damn it, do what you love! Stop wasting your life doing what you hate!). Sometimes it’s a little ridiculous; after all, people on Facebook aren’t afraid to say how much they absolutely hate Justin Bieber/Nickelback/Coldplay or condemn/adore the current political leader or state how people who love cupcakes should go burn in hell because obviously broccoli is the best. (Note: Obviously chocolate trumps both. Or chocolate cupcakes)

Is this why Generic Author A decides to write a supernatural YA trilogy about a girl named Angel Ivy-Rose Heavensby who finds out she’s an angel and has to struggle with her love for newbie werewolf Rolf Wolff, while wondering if she actually loves childhood friend Vladimir Dracul who turns out to be—you guessed it—a vampire? Is it why Generic Author B decided to revamp that series as a sexy romance with a naive girl-woman and a jaw-droppingly attractive quadrillionaire? Or why writers decide to write the same old thing, albeit with a slightly different title and character premise?

The series would look something like this. (Images: Various Google Images)

Well, some of them probably write those because they like the genre. They aren’t embarrassed to admit they liked reading the latest smash hit, and they enjoy writing stories based on that. That’s all good and dandy.

However, if you’re only writing a rip-off of the current craze because you want the ca$h or to become famous, that’s never a good sign. Remember the vampire craze? Sure, it was fine at the start, but nowadays there are far too many YA vampire novels. Do you want to be known as one of the countless imitations, or do you want to write something different and possibly start the next craze? Just remember: People will remember Twilight and Harry Potter in fifty years, but they won’t remember the ones that followed them just to cash in.

And, since I seem to have trailed off from my main point, I really should get back to that before… Hey, look, the Blerch!

Damn it. Well, anyway, what I’m trying to say is… Don’t just write what’s in because you’re scared to write your espionage novel that tackles rape culture/American gun culture/proves a point to Holohoaxers. This doesn’t mean popular fiction books can’t do that, but if it’s the five-hundredth zombie book based on The Walking Dead, then people aren’t going to notice the issue. They’re going to see it and go, “Oh, f***, not another f***ing zombie novel!” like some Gordon Ramsay clone.

When the faceless on the internet criticise The Hunger Games, for example, for being just another YA love triangle, they don’t seem to realise the books stray away from that, mainly focusing on the horrors of living in a world where teenagers face the possibility of being sent to fight to the death every year. However, since that was the first in the dystopian-universe-where-chosen-one-can-only-save-the-universe, readers actually think about it. Now there are so many of them around, readers don’t take stock of that meaning, they just read it, expecting it to be the same as the original, or toss it to the side because it’s just like the original.

If you see someone (or, if we’re being realistic, lots of people) on Facebook or elsewhere criticising something, remember you have the ability to actually do more than just criticise. Whether you’re a writer or whatever, you can quit that pointless complaining that nobody’s really listening to anyway, and get that out in the world (whether through a book or elsewhere) to show people you’re actively trying to do something.

If you post a comment on YouTube saying that people who like cupcakes are evil because they’re loony lefties, you’re not adding anything. If you just read that comment and don’t react at all, or do react but are too worried to respond, you’re not adding anything. However, if you paint a painting showing a cupcake slowly melting in the sun, or write “4 Reasons Why Cupcakes Are Better than Muffins” for Cracked, then you’re doing something.

Congratulations! You’re not just being a zombie, but you’re actually going to have more of an effect than if you just moaned about it to your friends. And, as ever, as long as you’re not intending to do something bad/illegal, then good on you!